The major news media was replete with reports over the weekend that the coffee company, Starbucks, "has no problem with customers packing heat while placing their orders." 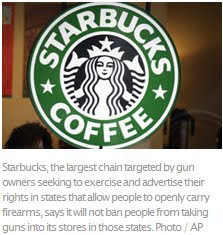 To tell you the truth, I'm not sure why this is even considered newsworthy. Perhaps because Starbucks is a Seattle-based company that caters to the "yuppie" crowd? Maybe because the anti-gun national news media is shocked and chagrined at Starbucks' statement? Who knows? That Starbucks would not want to alienate millions of gun owners (many of whom lawfully carry concealed weapons for personal protection) makes perfectly good sense to me. I'm sure the statement by Starbucks has little to do with guns and everything to do with business. But the fact is, there are tens of thousands of lawfully armed citizens who carry either concealed or open that have been peacefully doing business with thousands of companies around the country for years.

At last glance, 12 states allow unrestricted open carry. Those states are Alaska, Montana, Idaho, Wyoming, Nevada, Arizona, New Mexico, South Dakota, Vermont, Kentucky, North Carolina, and Virginia. Plus, at least 13 other states allow restricted open carry (meaning a permit is required). I know it infuriates gun-grabbing liberals to admit this, but the facts are absolutely undeniable that an armed citizenry is far and away a more civilized and peaceful citizenry.

Founding Father, author of the Declaration of Independence, and our third President Thomas Jefferson rightly said,

"Laws that forbid the carrying of arms . . . disarm only those who are neither inclined nor determined to commit crimes . . . Such laws make things worse for the assaulted and better for the assailants; they serve rather to encourage than to prevent homicides, for an unarmed man may be attacked with greater confidence than an armed man."

Founding Father, the man called "the father of the U.S. Constitution, and our 4th President James Madison, agreed with Jefferson. He wrote in Federalist, Number 46,

"[The Constitution preserves] the advantage of being armed, which Americans possess over the people of almost every other nation . . . [where] the governments are afraid to trust the people with arms."

Founding Father and author of the classic Revolution-era books, "Common Sense" and "Rights of Man," Thomas Paine concurred. He said,

"Arms discourage and keep the invader and plunderer in awe, and preserve order in the world as well as property . . . Horrid mischief would ensue were the law-abiding deprived of the use of them."

And should there be any doubt in the minds of sincere men regarding the advantages and appropriateness of an armed citizenry, the research of John R. Lott, Jr. is more than sufficient to dispel it. Lott is a senior research scientist at the University of Maryland, College Park. He was previously the John M. Olin Visiting Law and Economics Fellow at the University of Chicago Law School. His book, "More Guns, Less Crime: Understanding Crime and Gun Control Laws," is the most authoritative and thoroughly researched volume on the subject. And the title of his book is exactly what his research proves: More guns, less crime!

Lott's analysis "is based on data for all 3,054 counties in the United States during 18 years from 1977 to 1994." Lott said carry laws reduce violent crime because "victims who have guns are in a much better position to defend themselves." DUH! (See a University of Chicago-sponsored interview with Mr. Lott)

Of course, liberal gun-grabbers love to instill fear into people by saying that citizens carrying guns will result in more incidents of violence. However, the facts just do not substantiate this hysteria. Even our local "mullet wrapper" recently ran a column excoriating the new law that allows concealed carry permit holders to carry his or her sidearm in national parks and forests. The basis of their diatribe? "It's a risky change that will endanger families, hikers, those who work in these places and the park rangers themselves." (See the rant here)

Like all gun-grabbers, however, the fearmongering of the editorial board at the Pensacola, Florida, News Journal just does not square with the facts. As Lott observes,

"Criminals are deterred by higher penalties. Just as higher arrest and conviction rates deter crime, so does the risk that someone committing a crime will confront someone able to defend him or herself. There is a strong negative relationship between the number of law-abiding citizens with permits and the crime rate - as more people obtain permits there is a greater decline in violent crime rates. For each additional year that a concealed handgun law is in effect the murder rate declines by 3 percent, rape by 2 percent, and robberies by over 2 percent."

I well remember being invited to speak in the rural Montana town of Hamilton last year. Somewhere between 600 and 800 people assembled at the local fairgrounds to hear me speak. It was a terrific rally with some of the most patriotic and enthusiastic people I have ever spoken to. (They have invited me back to speak, this time at the University of Montana in Missoula, to a much larger crowd of probably several thousand later this May.)

Along with the vibrancy, energy, and sheer enthusiasm of that audience I observed that scores of people were openly carrying handguns on their hips. (No telling how many people were carrying concealed. Scores more, I'm sure.) Can one imagine a would-be killer trying to open fire in that meeting? Needless to say, not only did I feel at home, I felt absolutely safe - a whole lot safer than I feel when I travel to Washington, D.C. (or any other city or State restricting gun possession), that is for sure!

Obviously, the executives at Starbucks are wiser and more discerning than a majority of newspaper editors and television news anchors. They have seen several other business establishments that have introduced corporate policies prohibiting lawfully armed citizens from entering their establishments - and they've seen their profits and customer bases shrink dramatically! They've also, no doubt, seen what happened in Luby's Cafeteria in Killeen, Texas, when a madman crashed his vehicle into the restaurant and began shooting patrons at will. The total carnage on that horrific day back in 1991 resulted in 23 people dead and 20 more wounded, and the killer eventually killing himself. Some 80 people were in the restaurant when the shooting occurred, but Texas did not have a concealed carry law at the time, so no one was armed and able to fight back. (At this point, I strongly urge readers to watch the eyewitness testimony of former Texas State Representative Dr. Suzanna Gratia-Hupp - whose parents were killed in the Luby's Cafeteria rampage - given before the US Congress. See her testimony here.

Therefore, the sadness and chagrin of liberal gun-grabbers notwithstanding, I say, "Hooray for Starbucks!" And I don't even like their coffee. Maybe I'll give them another chance.

What does the Bible say about self-defense? - GotQuestions.org