In the past century, the world has faced many dangers. In the 1930s, the global economy seemed hopelessly broken. In the 1940s, Hitler and Japan were going to take over the world. During the Cold War days, we feared a nuclear attack from the Reds. In the new century, the fear of radical Islam has become a major concern.

I think the greatest danger facing us is the simple inability to blush at sin. We have reached a point where people have absolutely no shame about their immoral lifestyles. We may have dodged all these other calamities in the past, but there is no escaping the consequences of unchecked immorality. 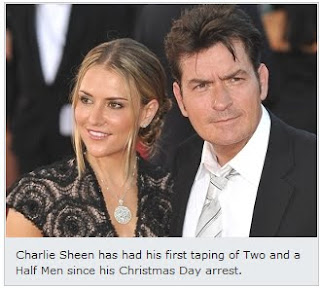 Years ago, it would have been a career-ending event for a popular entertainer to be arrested for any major crime. Today, celebrities are constantly in the headlines for some devious vice, and are given the cheeky titles of "bad boy" or "bad girl." Actor Charlie Sheen is one example. He has been in trouble for everything from drugs to domestic violence. One woman he was once dating mysteriously was shot in the arm. Despite all these troubles, Sheen remains the main star of the top-rated show, Two and a Half Men.

The whole criminal system winks at sin all the time. Five months ago, a judge in Scotland let the Lockerbie bomber out of jail - enraging the loved ones of his victims on Pan Am Flight 103. Ali Mohmed al Megrahi had been handed a life sentence after being found guilty in the December 21, 1988, murders of 259 passengers and crew, plus another eleven people on the ground. Unnamed Scottish doctors erroneously predicted that he’d be dead from terminal prostate cancer. Well, they must have miracle-workers in Libya, because five months later, the bomber is alive and living quietly at home. Sen. Charles Schumer of New York has demanded that Megrahi be returned forthwith to prison in Scotland, but that's not going to happen.

A man in Lexington, Kentucky, is another example of how bad we are at handling criminal behavior. Henry Earl has become an internet sensation for the sheer number of times he's been arrested. In 2008, he made big news when a public alcohol intoxication rap was thought to put him over the mark of committing his one-thousandth crime. If someone bakes a cake, he needs to add a lot more candles. The Smoking Gun clarified that Earl has actually been arrested 1,333 times since his first arrest in 1970 for carrying a concealed weapon. Since then, he has added several more offenses to his long list. On average, Earl is out of jail about two days before he lands back behind bars again. Instead of being a frequent visitor, he needs to become a permanent resident.

Seventy-five-year-old Floyd Crawford has also made a lifetime of crime. He has only been booked 403 times. What makes him noteworthy is his predictability for getting arrested. Time after time, he does just enough to get another thirty days in jail to keep out of the elements. This keeps Crawford out of the cold, but for the taxpayer, the costs add up. He gets three meals a day, laundry, and personal hygiene products. In Midwest City, jail officials say they spend $42 a day on each inmate.

The world's unwillingness to deal with sin has a direct relationship to our proximity to the tribulation hour. God has His own timing for everything, but any fool can tell that the Lord of the universe is not going to stand aside and let His creation mock His laws.

The danger that comes with living in a society that winks at sin is that you lose track of how deserving we are of judgment. Moral failing is a sign of the time, and it is hard to notice this indicator when so many people are happy to be moral reprobates.

"Were they ashamed when they had committed abomination? nay, they were not at all ashamed, neither could they blush: therefore they shall fall among them that fall: at the time [that] I visit them they shall be cast down, saith the LORD" (Jeremiah 6:15).

The Jesus You Can't Ignore: What You Must Learn from the Bold Confrontations of Christ - John F. MacArthur (Book)